In April and May 2015, as part of a huge new set of product and platform releases, we’ll be releasing new, high-performance SODA dataset API endpoints that will replace the existing enes. Developers will be given ample time to migrate their code to the new APIs, but starting later in the year the old SODA APIs for some datasets may stop receiving new data.

In addition to improved performance, the new SODA APIs have a ton of new features that you’ll love:

The new platform will also make it easier for us to release new features and entirely new APIs like the new global search API. Old APIs will not receive these new features.

Additional detail on the new platform release can be found in Socrata Rethink, and read on to learn how to migrate to your new improved API.

The first step in migrating to the new API to identify your new API endpoint. The best way to do this is by loading the API documentation for your dataset. You can find the API documentation either within the “Export” » “SODA API” sidebar in the old dataset page, or by clicking on the “API” button in the new “Data Lens” view:

Once you’ve loaded API foundry, you’ll need to identify whether you’re working with a new API or a legacy API. When viewing the API documentation, there will be an alert box at the top that notifies you if you’re good to go. If you’re viewing a legacy dataset, and a new dataset is available for you to migrate to, you’ll see a blue box like the following:

Many, but not all, datasets will be unchanged when they go through the migration process. Text , Number , Money , Floating Timestamp , and Checkbox datatypes should continue to function exactly the same on the new API as they did on the old API. Of course, you should test your code thoroughly to make sure everything is accounted for. Some other datatypes will undergo structural changes:

How do you know how your API will change? In the API documentation, we’ll detail that for you, similar to the below: 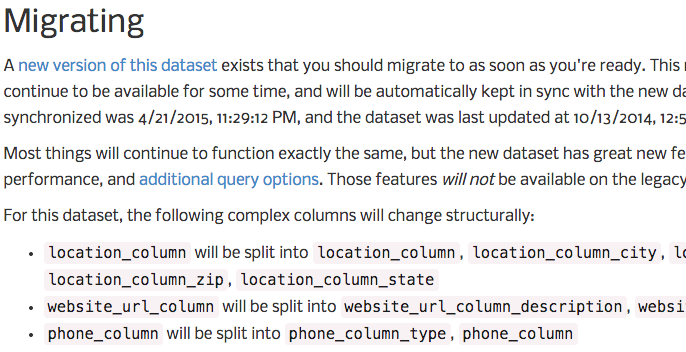 If you have any questions or encounter any issues, please do not hesitate to contact us for help! We’re striving to make this transition as easy as possible.